As promised, it's time for Chapter 2 of The Dating Do-Over. 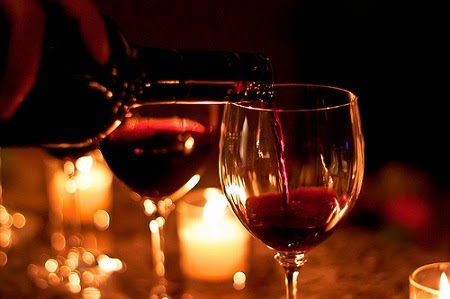 Viv pulled the mustard-and-rosemary-encrusted rack of lamb from the oven and set it on the counter to rest before resetting the temperature to 375°F. The individual cappuccino soufflés were in the fridge ready to go into the oven ten minutes before they were ready for dessert. The Scallops Yakitori was on the table.  Potatoes mashed ‒ check ‒ brussel sprouts with bacon on low on the burner - check ‒ Spanish red wine breathing on the table ‒ check. It was all good.
She rummaged through the cutlery drawer for the box of matches and hurried to light the two white candles on the table. It looked like a page out of a decorating magazine with its white linen cloth and the red placemats and napkins she had picked up on sale after Christmas. The smoke from the blown-out match curled toward the ceiling while Viv took an appreciative sniff from the wine bottle. The Toronto Life wine critic was right; she really could smell raspberry, chocolate, and vanilla in the bouquet.
Viv heard a key turning in the lock and tossed the matches back onto the kitchen counter. Running her fingers through her hair, she started toward the door with an eager smile as Kyle stepped into the apartment.
“Kyle!” she sighed, wrapping herself in his arms and snuggling against his chest. He smelled deliciously of musky cologne, and his black alpaca overcoat was soft against her cheek. He dropped his briefcase and overnight bag on the floor and pulled her onto her toes for a kiss.
“I’ve missed you, Sugar Lips. Boy, something smells good.” He let her go. “I’m starving ‒ I haven’t had anything except a bagel since breakfast.” Depositing his scarf and coat on a chair, he put an arm around her waist. “Wow, you look hot in that dress! Did you just get that?”
“Uh huh. From the money Daddy gave me for Christmas, so it didn’t cost us a thing. Do you like it?” Viv twirled so that Kyle could appreciate the dress, a red metallic with skinny straps and a short skirt.
“I’ve always liked you in red. You should wear it more often.” He drew her to the table and lifted the casserole lid. “What’s this?”
“Scallops Yakitori.”
“Looks great.” He nabbed a skewer and tore a scallop and mushroom from the end with his teeth. “Good.”
“Never mind about the food.” Viv turned him around to face her. “Tell me about the interview. Did you get the job?”
“I sure did.” The grin on his face was huge.
Viv threw her arms around him and kissed him. “That’s fantastic! I’m so proud of you!”
“Thanks, baby. All my hard work is finally paying off.” He patted her bottom. “Come on, let’s eat.”
She released him, and they sat down at the table. He bit into another scallop while she beamed at him.
“Did they give you a start date?”
He nodded, picking up the wine bottle and sniffing. “March 1st. What’s this?”
“It’s a 2010 Ribota. But that doesn’t give us much time. I’ve got to give notice at school, and we have to let the landlord know.”
He poured wine into their glasses. “Don’t worry about it. Let’s not spoil dinner with the details. It looks like you’ve made another fabulous meal.” He handed her a glass and picked up his own. “Happy Valentine’s Day, Viv.”
She clanked her glass against his. “Happy Valentine’s Day, sweetheart.”

Kyle ran his spoon around his dessert cup and licked it before dropping it onto his plate. “That was so good, but I ate too much.” He leaned back in his chair and patted his flat stomach. “I’m going to have to go for an extra-long run tomorrow to burn this off.”
Viv spooned some of the chocolate sauce from her cup and let it melt onto her tongue. “I can think of a good way to start burning calories tonight, if you like,” she said, playing with the spoon against her teeth.
“Come here, Sugar Lips.”
She sashayed around the table and slid onto his lap. Bending to reach his mouth, she kissed him with a tantalizing slowness, feeling the rush of heat from his lips course all the way down to her toes. When the kiss had ended, he bit the dress strap off her shoulder and nuzzled her skin with his lips. It tickled, and she giggled.
“Don’t think I forgot about getting you something special for Valentine’s Day,” he said in a husky voice. The other strap slipped from her shoulder while Viv squirmed against him.
“I know. There was a phone message from Superior Jewelers when I got home,” she said in a breathy voice.
He lifted his dark head to gaze into her eyes. “So, you think I bought you jewelry this year?” One of his eyebrows arched as he smiled teasingly at her.
“I’ve been wondering what it was ever since I got home from work.”
“Well,” he said, sliding a brown velvet box from his jacket pocket and holding it up on the palm of his hand for her inspection, “I’d better not keep a lady waiting.”
Viv gulped. Ohmigod, the moment she had been waiting for was finally here! She held her breath as Kyle lifted the lid. Nestled inside were two golden drop earrings with diamond-encrusted hearts. Her own heart plummeted.
“Pretty, aren’t they? The store only had them with emeralds, so I had to special order them to get diamonds. Do you like them?”
“I don’t understand.” Viv dragged her eyes from the earrings to stare at him.
Kyle frowned. “You don’t like them?”
“No, sweetheart, they’re really nice. I just thought that with the new job and the move to Vancouver and all, it might be something different.” She looked away, feeling disappointed and small. “I thought you might want to propose to me tonight.”
Kyle stood up, forcing Viv to scramble from his lap.
“Look, we need to talk.”
“What about?” She was suddenly apprehensive, and began fidgeting with the ring she wore on her right hand. It was a single pearl with two diamond chips on either side. Daddy had given it to her on her sixteenth birthday.
He drew Viv to the couch and they sat down. “This new job is going to be a great opportunity for me, you know. It’s going to make my career.”
“I know. Jenkins, Weber, and Chan handle some of the biggest sports stars in Canada. They’re a great firm, and you’ll do a wonderful job for them. You’re not having second thoughts, are you?”
“Are you kidding? I’m so ready for this. Plus, I’ve been wanting to make a fresh start somewhere, and Vancouver is just the city to do it in.”
“Then what’s the problem?”
Kyle took her hand and gazed into her eyes.  “I’m going to Vancouver on my own.”
Viv’s stomach sank. “I don’t understand. Do you mean you’re going ahead to find us a place to live?”
He shook his head. “We’ve been together a long time, Viviane.”
“I know. Six years.”
“Yeah. It’s time we decided where this relationship is heading. I think it would be best if we spent some time apart to really think things through. We were awfully young when we got together, you know. Just kids starting out after school.”
Viv’s bottom lip started trembling. “You mean, you don’t want to get married?”
“Not now. This job comes with a whole lot more responsibility. I’m going to have to focus one hundred percent to be on top of my game. I can’t be worrying about anyone else. You want me to be a success, don’t you, Viv?”
“Well sure, Kyle.”
He nodded and flashed her one of his dazzling smiles. “I knew you would. You always want what’s best for me.” He started to rise from the couch, but she snatched his arm and tugged him back down again.
“But maybe I can come visit you in a couple of months, after you get settled.” Her eyes searched his face for reassurance. It couldn’t be over between them. “We could talk then, see where we are.”
He paused, one knee on the couch. “I think it best if we made a clean break, don’t you? You’re young, Viv. You want marriage and kids. I can’t do that now, but I wouldn’t want to hold you back if you found someone else. It wouldn’t be fair to you.”
He raised her hand to his lips and kissed it before standing. “Let’s make this as painless as possible, shall we? I’ll come by tomorrow to pick up my clothes while you’re at work.” He glanced around the room. “Most of this stuff is junk, anyway, so you can keep it or donate it to charity. I don’t want it.”
He threw on his things and picked up the briefcase and overnight bag. “I’ll put my apartment key through the mail slot when I’m finished. Take care of yourself, Sugar Lips. You’ll always have a special place in my heart.”


He was out the door just as the tears brimmed over and cascaded down her cheeks.

You can get The Dating Do-Over for just $0.99 this week using a Smashwords coupon to purchase the book in the format of your choice. All you have to do is click on the "Contact Cathy" app at the top right of the page and leave your name, e-mail address, and a message saying that you want the Smashwords coupon for The Dating Do-Over. I will e-mail the coupon to you ASAP. But hurry - the price will go up as more chapters are posted!

If you would like to receive an e-mail when a new Cathy Spencer novel is released, just leave your name and e-mail address with the "Contact Cathy" app to the right of this post.
Posted by Cathy Spencer, Author at 18:26