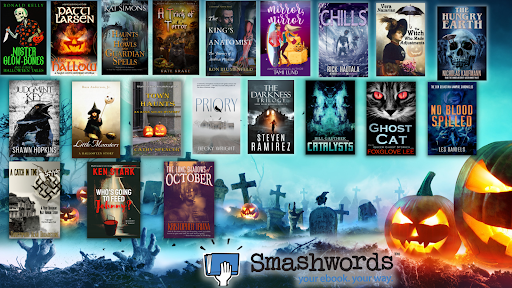 I'm very pleased that the e-book retailer, Smashwords, is including my Halloween mystery thriller, Town Haunts, in their special Horror/Thriller promotion! To show my appreciation, I'll be discounting the e-book to just $1.99 from October 15 - 31, 2021. Customers will enter the coupon code XT28P (not case-sensitive) to obtain the discount prior to completing their checkout.

Town Haunts is the 2nd book in the award-winning Anna Nolan mystery series. Haven't read the 1st book, Framed for Murder? No problem. It's available on Smashwords for free!

Have a spooky Halloween, everyone!

Here's an excerpt from Town Haunts:

It was the middle of the night, but Sherman couldn’t sleep. Too many old demons whirling around his brain and pricking at his conscience. Frustrated, he threw back the covers and sat up on the edge of the bed, the soles of his feet chilled by the bare floor boards. Running his hands through his clipped, grizzled hair, he pushed himself up off the bed, jammed his feet into slippers, and limped downstairs in his shorts and undershirt.

The kitchen was dark, but Sherman didn’t bother with the lights. He fumbled for a water glass from the cupboard and took the vodka bottle out of the freezer. The blue light from the stove’s digital clock was enough to see by as he poured two fingers of Stoli into the glass and put the bottle back. Leaning against the counter by the kitchen sink, he took his first sip. Ahh. The alcohol was cold and smooth going down the back of his throat.

Meaning to count to twenty before taking a second sip, he rested the glass on the sink and looked out the window past the dingy curtains. The house was set up high on a hill next to the Crane municipal cemetery, allowing him to see over the wall into the grounds. For a moment, he thought he caught a flicker of light through the trees. He rubbed his eyes and stared, straining to see it again, but the wind was up and the trees were thrashing. There! He saw the light again, briefly. Maybe it was one of those damned kids up to no good. They had no respect for the dead, knocking over tombstones, spray painting ugly messages on the walls, and leaving empty beer cans right on top of the graves. He’d better take a look, or else he might have a mess to clean up tomorrow.

Forgetting to savour his drink, Sherman downed the rest and hurried upstairs to put on his pants and a warm jacket. It was mid-October in the Alberta Foothills, and the nights were getting frosty. He grabbed his cemetery keys and hobbled down the stairs as fast as his sore knee would allow. Letting himself out of the house, he slid down the damp grass heading for the gate in the cemetery wall. The door screeched as he opened it, and he cursed himself for not keeping the hinges oiled. Easing the door shut behind him, he paused in the flat orange light beneath a security lamp on the ring road.

Everything was still except for the gusting wind. He could see his breath coming out in excited puffs and smelled the sharp wood smoke from the houses on the far side of the church. He shivered as the wind penetrated his clothes. It was too cold to stand still for long, so Sherman crossed the road and set off across the frosty grass. The sky was enshrouded in thick, grey cloud, and it was inky black among the plots. He got his bearings from the familiar tombstones, running his hands over their chilled, smooth surfaces as he hobbled past them. Pausing by a stone angel, Sherman peered to the left, toward the older part of the cemetery. That was the direction the light had been coming from when he had seen it from the kitchen window.

There it was, blinking through a stand of twisting evergreens. He crept toward the trees, taking his time so as not to snap a twig along the way. Was that whispering he heard? He paused to listen, but the branches were creaking too much to be sure, so he kept on. Reaching the evergreens, he edged around them carefully, trailing his hands over their rough bark.

He knew exactly where he was. There was a bench on the other side of the trees with a plot directly in front of it. The words inscribed on the black tombstone read, “Evelyn Mason, Beloved Wife and Mother, November 2, 1954 – March 10, 2012.” Evie’s grave. He rounded the trees and burst out of hiding.

“What do you think you’re doing here?” he hollered. But there was no one there, just the dim outline of the tombstone. He hesitated, sure that this was where he had seen the light.

“Sherman . . .” a voice sighed plaintively on the wind. He jerked his head sideways, trying to follow the sound, but it was impossible to tell where it came from. His hands clutched the bench for support, the metal cold and hard beneath his fingers.

“Who’s there?” he yelled, straining to see in the dark.

“Sherman . . .” the voice moaned, emanating from the heart of the plot deep in front of him. His breath came in short gasps, and his legs were shaking.

“Sherman!” the voice shrieked, piercing his ears and squeezing the breath from his lungs. He turned to run and tripped. Clawing at the ground, he staggered to his feet, terrified of skeletal fingers clutching at his shoulder. He tore across the grass and ran between the plots, barking his shins on more than one tombstone. He found the ring road and pushed himself down it, running and hopping as fast as he could. Reaching the door in the wall, he flung it open and staggered up the slope for home.

Thank God he had left the front door unlocked. Once inside, he shot the bolt home and ran upstairs to cower in bed with the ceiling light on. He lay there, his heart thumping erratically in his chest, and willed it to calm down. Mental imaging the people at the hospital had called it after his heart attack five years ago. He swallowed hard and tried to think. Was he crazy, or had his wife just called to him from the other side of the grave?

Her photograph was on his bedside table in a polished silver frame, the only valuable thing still left. Staring at the beautiful young woman with shining blue eyes smiling into the camera, a snort of laughter burst from his lips. He laughed and laughed until his eyes ran, and he was gasping for breath. The laughter subsided, and he picked up the picture and clutched it to his chest.

Posted by Cathy Spencer, Author at 03:57