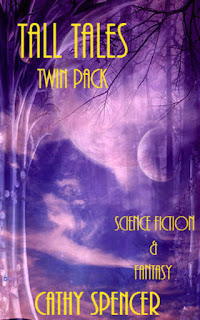 Tall Tales Twin-Pack, Science Fiction and Fantasy, is now available as an e-book on Smashwords.com and soon to be available through most e-retailers.

"Two short stories in one book, one science fiction and one fantasy.

'Your Daughter is Marrying an Alien' (originally published by Foliate Oak Literary Magazine, November 2011) is set in the year 2080. Simple farmer Lloyd Hodgkin suddenly learns from his wife, Dorothy, that their only child is engaged, and not to the boy-next-door.

'Willimede's Quest' is the story of a young female guard on a quest to find an elixir that will keep her queen alive. Pursued by hunters, she seeks sanctuary at a king's castle, where she must convince him that she is who she says she is. Will the mystical object she possesses be enough to buy her safety?"