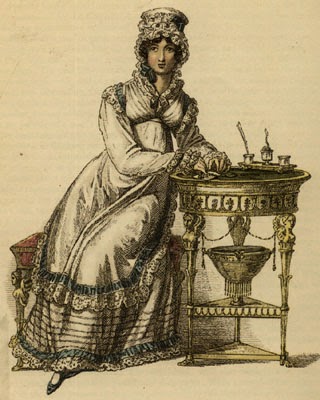 The next project on my author's to-do list is to revise The Marriage Market, a sweet regency, stand-alone novel. The Marriage Market was the first book I ever wrote back in 2008. Its inspiration came from a dream - occasionally my subconscious hands me a story concept on a plate - and I went for it. But when the publishing rights reverted back to me in 2014 from the e-publisher I was working with, I decided not to re-release it along with The Affairs of Harriet Walters, Spinster and Framed for Murder. It needed some reworking, but with three additional novels under my belt, I feel ready to tackle it now.

And now, here's the opening scene from The Marriage Market.

With one daughter approaching a marriageable age and another not far behind, Admiral and Mrs. Larke had a problem to consider. They discussed it in the admiral’s dressing room as they reviewed his wardrobe, a task necessitated by his recent retirement from the British Navy.
“Caroline is adamant in her opinion? She will not marry a navy officer?
“So she says, Frank.”
“Well, that is rather insulting, considering her father’s profession.”
“No, you mustn’t look at it in that light. She has the utmost respect for the Navy and its members — particularly for you, of course. She simply does not wish to marry someone of that profession. This shirt collar needs mending. What do you think of the jacket?” Mrs. Larke pulled the article from the trunk and gave it a shake.
“It will do.”
“Here, stand up and try it on. I haven’t seen you wear it these past thirty years.” She stretched up on tiptoe to assist her husband. The admiral’s figure was more distinguished than it had been in his civilian days, and the buttons failed to fasten. He began to flush with the effort and brushed her hands away.
“Never mind the jacket, dearest. Let us return to Caroline. She was always such an amiable girl. Whatever have you done to give her such a low opinion of the Navy?”
Mrs. Larke, a mere bird of a woman, drew herself up to her full height and glared at her husband. “Do you accuse me of complaining to the child, sir?”
The admiral sank back into his wing chair. “No, of course not, Martha,” he grumbled. “You have always been my strong right hand on the home front. There is none more game and reliable than you. You are not a complainer.”
Mollified, Mrs. Larke knelt beside his chair and helped to remove the jacket. “Caroline is an obedient and genial girl, but underneath that sweet exterior lays a flinty will. I always tried to hide my nerves from the children while you were away fighting that villain, Napoleon Bonaparte, but Caroline guessed my fear and decided against the life of a navy wife. She once told me that she wants a husband who will sit in front of the hearth with her at the end of the day. I know how lonely the life of a sailor’s wife can be, Frank. I said that she could go to sea with a captain husband, but she wants her own home. Caroline is nineteen now, and eager to marry. I think that we should help her to find a stay-at-home husband.”
Admiral Larke harrumphed. “But we live in Portsmouth. Not marrying a navy officer leaves out almost all the eligible gentlemen we know. Just whom is she going to marry?”
Mrs. Larke laid the jacket next to the trunk and stood. “I know it’s a problem. I’ve been talking it over with my sister, and she thinks it best we move away.”
“Move away! But I’ve just come home after thirty years at sea!”
“I understand that this is upsetting. I’m very fond of our home myself, but there is more than Caroline to consider. Have you not noticed a change in Patricia?”
“Confound it, madam, she has not voiced a prejudice against the Navy too, has she?”
“No, I mean in her appearance.”
“Not my little sprout!”
“Your little sprout is seventeen, just two years younger than Caroline. She’s becoming more womanly every day. In two or three years, we will be looking for a husband for Patricia too. We should be living where there is a selection of fine young gentlemen to choose from. We don’t want our daughters to settle for just anyone, do we?”
The admiral sighed. “Did you and your sister also decide where we should move to?”
Mrs. Larke nodded. “Bath.”
“Bath! That’s a little dear, isn’t it?”
She folded her arms across her chest. “Yes. Dearer than Portsmouth, but less expensive than a house on a good street in London. Listen to me, pet. I’ve been running this household on the same budget you gave me when you made captain fifteen years ago. It’s time to loosen the purse strings. We shall begin with new clothing for you. Your uniform must retire too. We’ll not find a fine gentleman for Caroline with you wearing clothes fit for the gardener!”
The admiral sighed and lowered his head in defeat.

If you would like to receive an e-mail when a new Cathy Spencer novel is released, just leave your name and e-mail address with the "Contact Cathy" app to the right of this post.
Posted by Cathy Spencer, Author at 08:23