Just finished reading Carola Dunn's cozy mystery, Superfluous Women, the latest installment in the Daisy Dalrymple series. I've already read a few of the other books in the series and enjoyed them. The setting is England after the first world war and features Daisy, a poor but titled young woman who makes her living by writing and selling magazine articles, and the Scotland Yard Detective Chief Inspector she marries.

In this episode, Daisy is convalescing after a bout of bronchitis in the small town of Beaconsfield, where she meets up with an old school chum who has just moved to town with two other women. These three young "spinsters" are some of the "superfluous women" referred to in the title who will never find husbands because of the 700,000 British men who died during WWI. Wanting a home of their own, they pool their resources and skills to buy a house, but it turns out that the house comes complete with a dead body locked in the wine cellar. Soon Daisy is tottering around town in between naps to help solve what appears to be a murder, and it doesn't take long before her husband is drawn in out of his jurisdiction to aid with the investigation.

What do I like about the series? I like the historical elements and the traces of humour in the writing. The primary characters are interesting and likable, and no one owns a craft store or has a cat who solves the crimes. But mostly, the mysteries are gentle - no gore, no overt violence, and Daisy is seldom threatened herself. They're a nice, easy-going read, perfect to relax with before turning out the lights and going to sleep. We don't always want our reading to be spicy or thrilling, so if this kind of story appeals to you, I recommend it.

The covers are also quite attractive, don't you think? 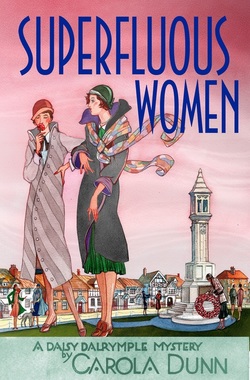 Catch the next book in my summer reading diary, coming soon. Cheers!

You can subscribe to my blog or follow it by e-mail by clicking on the icons on the bottom right of the page.
Posted by Cathy Spencer, Author at 19:05