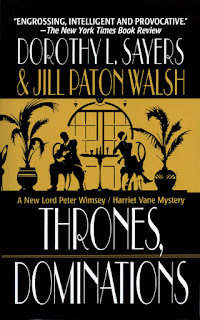 I'm a Lord Peter Wimsey fan. In case you're not familiar with his stories, they were written by Dorothy Sayers, one of the three queens, along with Agatha Christie and Margery Allingham, of the golden age of British detective fiction. Lord Peter is an aristocratic amateur detective who turns to solving murders, with the help of his faithful man servant, Bunter, to overcome the effects of shell-shock suffered during WWI. He disarms people with his bland appearance and silly conversation, as did the Scarlet Pimpernell, but is actually brilliant, athletic, and intuitive. He's also kind and wears his heart on his sleeve for crime novelist Harriet Vane, whom he gets off a murder charge in the poisoning death of her ex-lover, and ultimately marries. If you like stylish historical mysteries that are cleverly written with an endearing detective, I highly recommend the series.

I revisited Thrones, Dominations last week. It's set after Busman's Honeymoon, when Harriet and Peter have only been married a few weeks and Harriet is being introduced into "society" as Peter's unconventional wife. The 13th Lord Peter novel, Sayers began writing it in 1936, but never finished it prior to her death in 1957. It was published in 1998 after the trustees of Sayers' estate asked novelist Jill Paton Walsh, shortlisted for the Booker Prize, to finish it.

You see this happening time and again when a famous series novelist dies and the trustees ask another author to finish a story or even write a brand new one. The books are often a disappointment; just not quite good enough. Thrones, Dominations, however, is very good. It's faithful to the characters as Harriet struggles with continuing her writing career while dealing with servants, social obligations, and whether or not to have children, and Peter investigates the murder of a beautiful married woman who is an acquaintance of the couple. Amusing, suspenseful, and well-crafted, it's well worth the read for those who hunger for just one more Lord Peter Wimsey story.

I can't resist adding this picture of Lord Peter and Harriet Vane, as portrayed by Edward Petherbridge and Harriet Walter, in a  1987 BBC dramatization of Have His Carcase. 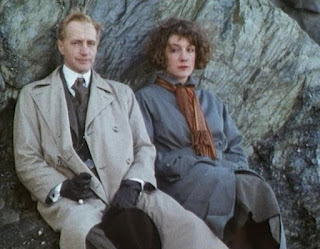 If you'd like to be notified when new novels are released, just leave your name and e-mail address with the Contact Cathy app to the right of this post, and I'll include you on my mailing list. Cheers!
Posted by Cathy Spencer, Author at 13:01