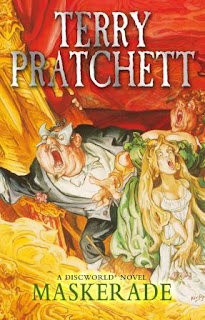 It's Saturday of the Labour Day Weekend, Summer's last slow, sweet kiss before the kids go back to school, the weather turns cooler, and we all get busy with lessons and meetings again in an inexorably quick slide toward Christmas. Whew! Makes me feel tired just thinking about it.

Putting all that aside, today is the last instalment of my Summer Reading list, and it's a special one.
Maskerade, by Terry Pratchett. It's not the first book of the Discworld fantasy series, but it's the first Discworld story I ever read over twenty-some years ago. It also features one of my two favourite Discworld characters from Mr. Pratchett's mad collection, Lancre witch Granny Weatherwax. (My other favourite is Sam Vimes, Commander of the Ankh-Morpork City Watch.)

Now Granny Weatherwax is probably the most powerful witch that the Discworld has ever known. She's tall, thin, wears her grey hair in a steely bun, and doesn't hold with none of that occult kind of nonsense. She believes in headology, or using the lore of witchcraft to help people believe so that they can help themselves when real witching isn't required. Or tricking people, as Agnes (Perdita X.) Nitt, a hefty young woman with good hair and a wonderful personality who doesn't want to become a witch but has a voice with an impossible range and who can sing harmony with herself, thinks. Agnes has just run away to the big city to audition for the Ankh-Morpork opera. And although she doesn't have the stage presence that the dimwitted but beautiful Christine has, she can still be useful as Christine's voice. Except that there's a problem, a ghost in the opera house who leaves insane notes telling the owner what operas to perform and occasionally murders people who get in his way.

While all of this is happening, Nanny Ogg, Granny Weatherwax's long-time friend and the second witch in the Lancre coven, has just  had a cookbook printed. It's called The Joy of Snacks. Not that she does much cooking herself, not when she has a slew of daughters-in-law to do her cooking and house cleaning. And it's more of a cookbook with entertaining sexual anecdotes, something else Nanny is good at after having buried three husbands. Only she's no good at math and doesn't realize that her cookbook is a best seller and is making lots of money for the publisher, who returned her printing fee but hasn't paid her any royalties. Granny Weatherwax figures it out, however, and so the two witches head for Ankh-Morpork to claim the money that's owing to Nanny, as well as to check up on Agnes, for whom they've seen a disturbing picture in their tea leaves. (Not that tea leaves can tell the future. That's just part of that occult nonsense and got nothing to do with real witching.)

Aside from the delightful story, which is a send-up of the Phantom of the Opera tale, readers can also be entertained by the cartoonish and colourful cover that make the Discworld novels stand out from the other books on the shelf. The Maskerade cover, pictured above, is a good example.

Now it's time to recount all of the books that were part of my Summer Reading diary. They were:
I hope you've enjoyed my summer reading series and discovered some new authors to savour. Have a great Labour Day Weekend, and squeeze in a few hours of lazy reading, if you can. Cheers!

If you'd like to be notified when new novels are released, just leave your name and e-mail address with the Contact Cathy app to the right of this post, and I'll include you on my mailing list.
Posted by Cathy Spencer, Author at 07:12