The wise-cracking Spenser was his first creation, and my personal favourite. He's a maverick, with overtones of an old-time frontier sheriff and private eye Sam Spade - guys who go it alone, more concerned with upholding their own sense of justice than the letter of the law. They have their own code of conduct and are true to themselves.

Spenser has given his heart - passionately, totally and forever - to psychologist Susan Silverman, and she to him. Neither of them love blindly. Spenser knows Susan's strengths and faults, including the little peccadilloes he must overlook, but every time he sets eyes on Susan, he still thinks "Wow."  Also, Susan has to live with the fear of Spenser being murdered one day, and it isn't easy for her.

But the unusual thing is, that for all of their love, Spenser and Susan know they can't marry each other. They can't even live together. They experimented with it once, but decided to maintain separate residences. Their unconventional relationship works for them, and they're wise enough to leave it alone.

Female P.I. Sunny Randall's love life is a variation of this theme, albeit a slightly darker one. She was once married to the love of her life, Richie, and although they're divorced now, that doesn't mean that she can let go of him, or he of her. Sunny and Richie love each other, so even if he marries again or she has a relationship with a guy with real potential, they can't stop seeing each other. In Sunny's case, marriage to Ritchie doesn't work because it somehow diminishes and smothers her. She's seeing psychologist Susan Silverman (surprise!) about it, but so far, Sunny hasn't worked it out.

Parker takes the obsessive love theme another step further with police chief Jesse Stone. Jesse used to be a homicide detective with the Los Angeles Police Department, but he developed a drinking problem after his divorce from Jennifer, and is asked to resign from the LAPD. Jesse's even drunk when he shows up for an interview for the chief of police job with the town of Paradise, but he's hired anyway. He's seeing a psychologist to understand his problems. Of course, Jesse's greatest problem is that his wife won't stop calling him whenever she needs him, and he can't stop helping her. Jennifer is the most unlikeable of the significant others in these series, a beautiful but self-absorbed, weak woman who sleeps around to promote her career. She uses Jesse as her safety-net. He knows it, but he can't stop himself.

So, getting back to Potshot. (Spoiler alert: The story ending is revealed here.) Mary Lou Buckman hires Spenser to find out who killed her husband. Mary Lou is a pretty, desirable young woman who moved with her husband from Los Angeles to Potshot, Montana to open a tourist horse-back riding business into the nearby Saw Tooth Mountains. She thinks that a gang of extortionists who plague the small town are responsible for her husband's death, but since she can't get the local sheriff to act on her beliefs, she comes to Spenser for help.

Mary Lou is not only good-looking, but strong, earnest, and still capable of blushing at sexual innuendo. But all is not as it seems. Turns out that Mary Lou is a key player in a real-estate swindle. She's sleeping with the mob boss funding the swindle, and either killed her husband herself, or arranged for one of 2 lovestruck men who followed her to Potshot to kill him.

One of them is Sheriff Dean Walker. His affair with Mary Lou ended his marriage. His morality is a little shaky, but he saves Spenser from being killed and is pretty good at trading quips, so he's still likeable. Plus, we feel sorry for him because Mary Lou is lying to him.

In the end, even when he finds out that the woman he's maybe killed for has been "making love" with the mobster and is using him, Dean can't help himself from saving Mary Lou from Spenser and retribution. And we like Dean a little more because he doesn't use his gun to do it. He's willing to be shot to save the woman he loves, no matter how bad she is.

Sigh. Whether we're on the highest plane with Spenser and Susan, or rolling in the mud with Mary Lou and Dean, romantic, even obsessive love is a motivating force in Parker's stories. The crazy romantic.

If you want some insight into Parker's own relationship with his wife, Joan H. Parker - to whom all of his books are dedicated - have a look at her New York Times obituary, as well as Parker's, who pre-deceased his wife by 3 years. 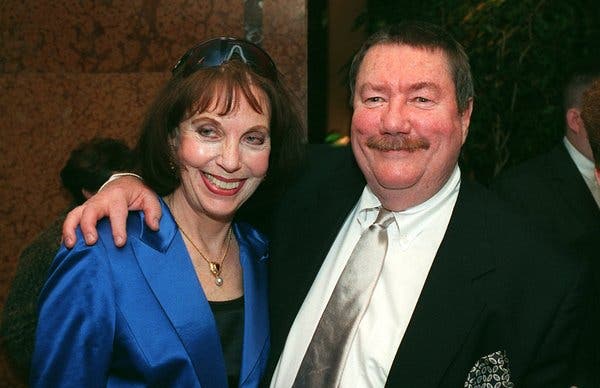 Robert and Joan Parker
Posted by Cathy Spencer, Author at 10:09