Framed for Murder on Sale! 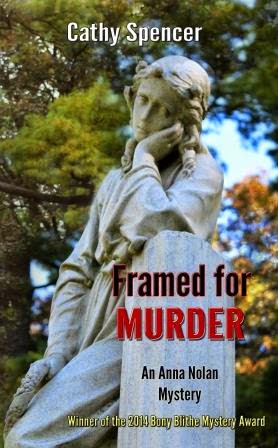 Framed for Murder, Book 1 in the Anna Nolan series and winner of the 2014 Bony Blithe Mystery Award, is on sale for just $0.99 until Sunday, December 14 at most e-book retailers. It's listed with Indies Unlimited "Thrifty Thursday," which is all about great deals.

"I seldom give five stars for a book but in this case I don't have another possibility. It's an absolutely brilliant story." -  Goodreads Review

Anna Nolan discovers her ex-husband, Jack, on a deserted country road one night . . . dead, unfortunately.  He could only have been in town to see Anna, unless Jack was looking for their son, Ben.  At least, that’s how the tall, cool Brit leading the police investigation sees it.  To divert suspicion away from her son and herself, Anna delves into Jack’s personal life, only to discover that the actor had been romancing three very different women on a nearby film set.  With some rather unorthodox ideas on how to conduct a murder investigation, Anna sets about meeting her ex-husband’s lovers, with harrowing results!

If you would like to receive an e-mail when a new Cathy Spencer novel is released, just leave your name and e-mail address with the "Contact Cathy" app to the right of this post.
Posted by Cathy Spencer, Author at 05:33